Beth Hart has included powerful renditions of Led Zeppelin's Whole Lotta Love in her live sets for quite some time. While working on her 2019 album, Hart did her take on it so impressively during a studio session that producer Rob Cavallo was so blown away by that he suggested that Beth should consider doing a full album of Zeppelin songs. 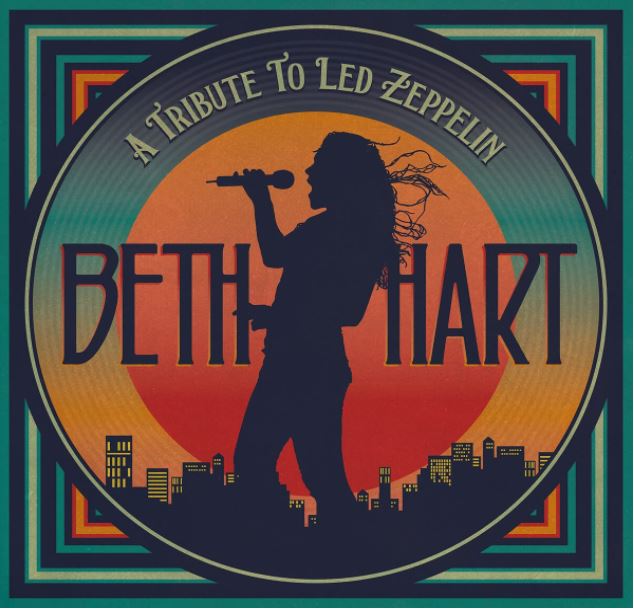 Down time during the pandemic brought her around to taking him up on the idea. Hart and Cavallo assembled a backing lineup that includes musicians that have worked with everyone from Bob Dylan, Alice Cooper, Slash, Joe Cocker and the Rolling Stones to Celine Dion and Alanis Morissette. Beth Hart: A Tribute to Led Zeppelin drops on February 25th.

Filming is expected to start this summer on a rockdoc being co-exec produced by Pete Townshend and Roger Daltrey on the life of drummer Keith Moon. Variety reports that the working title of the movie is The Real Me. 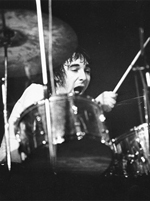 Paul Wittington (The Crown) will direct and Jeff Pope (Philomena) is scripting the movie and production is being managed by White Horse Pictures, a company with an impressive track record that includes work on Martin Scorsese's George Harrison: Living in the Material World film and Ron Howard's Eight Days a Week: The Touring years movie about the Beatles. 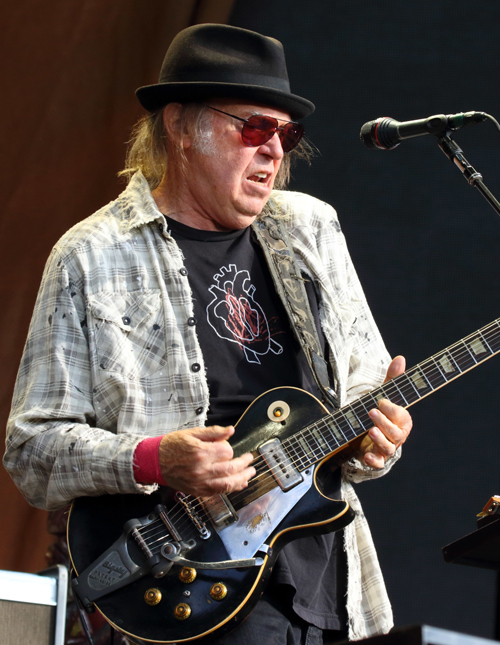 Neil Young issued an ultimatum to Spotify a few days ago; drop controversial talk show host Joe Rogan's podcast or remove Young's music from the service. Yesterday, Spotify, which reportedly forked over $100 million to be Rogan's exclusive podcast platform, made its decision and began dropping Young's music. SiriusXM wasted no time exploiting the opportunity to pick-up Spotify users that might defect from that streaming service in support of Young's decision. Today, the satellite radio and streaming outlet announced that Neil Young Radio would be added to the SiriusXM lineup of artist centric stations. 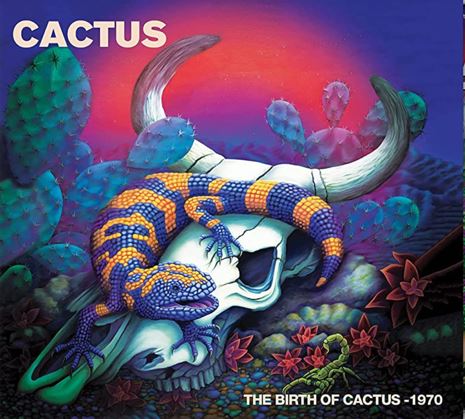 The saying "when one door closes, another opens" could be applied to the late 60's, early 70's lineup of the hard rocking American group Cactus. The door closing was Jeff Beck being in a car accident. That thwarted the earlier formation of what would become Beck, Bogert and Appice. With Beck sidelined for more than a year, former Vanilla Fudge members Tim Bogert (bass) and Vinnie Appice (drumes) recruited guitarist Jim McCarty (Mitch Ryder's Detroit Wheels, Buddy Miles Express) and singer Rusty Day (Amboy Dukes) to form Cactus late in 1969. The group's thunderous live presence soon had critics blessing and cursing it as being the 'American Led Zeppelin'.

Amazingly, the first live performance the original lineup did was on a bill that included the Jimi Hendrix Experience, the Grateful Dead and the Steve Miller Band at Temple University in Philadelphia on May 16, 1970. Doubly amazing is that the Cactus set was recorded and is now out on an album titled The Birth Of Cactus - 1970. The blistering and roaring set delivered by the band is very impressive.

The original lineup only lasted a couple of years and three albums. McCarty parted ways with the group at the end on 1971 and Day got bounced soon after. The group came to an end when Bogert and Appice joined Beck in Beck, Bogert and Appice, a group that only lasted a couple of years and albums. Subsequent versions of Cactus would be formed by Duane Hutchings in 1973 and Rusty Day in 1976. McCarty joined the most recent reincarnation of the group in 2011 and Appice was involved in reviving some previously unreleased material from the band as recently as 2016. 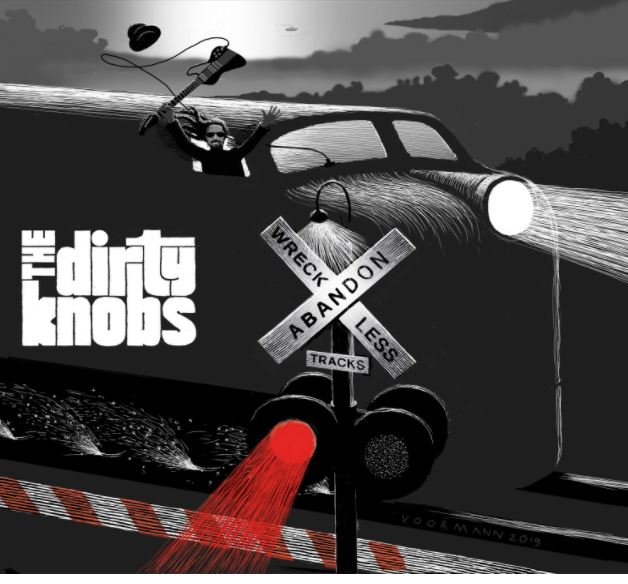 Mike Campbell's band the Dirty Knobs will release its second album on March 4th. External Combustion finds the former Tom Petty & the Heartbreakers member working with former band mate keyboard player Benmont Tench on a track titled Lightning Boogie. Another notable guest on the eleven song release is Mott The Hoople veteran Ian Hunter. Campbell says that on the follow-up to the excellent 2020 debut album from the group that, "The longer we played, the more intuitive it got." That process inspired the album's title. Preview a track from the album here. 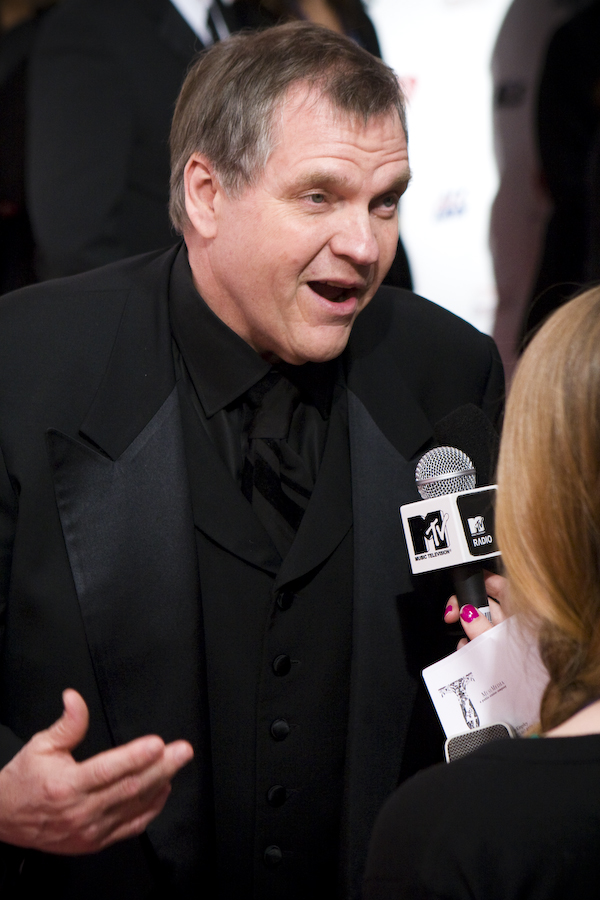 R.I.P. Meat Loaf. The artist whose Bat Out Of Hell album ranks as one of the best selling albums in history passed away of an undisclosed cause last night with his family at his bedside. Born Marvin Lee A day, his large stature and larger than life personality made him an entertainment juggernaut on albums, on stage and on screen in the Rocky Horror Picture Show.  His family honored him and thanked fans by writing, "We know how much he meant to so many of you and we truly appreciate all of the love and support as we move through this time of grief in losing such an inspiring artist and beautiful man." Meat Loaf was 74.

After a two year COVID hiatus, the New Orleans Jazz and Heritage Festival is back this spring. Planners announced the event's massive lineup today. 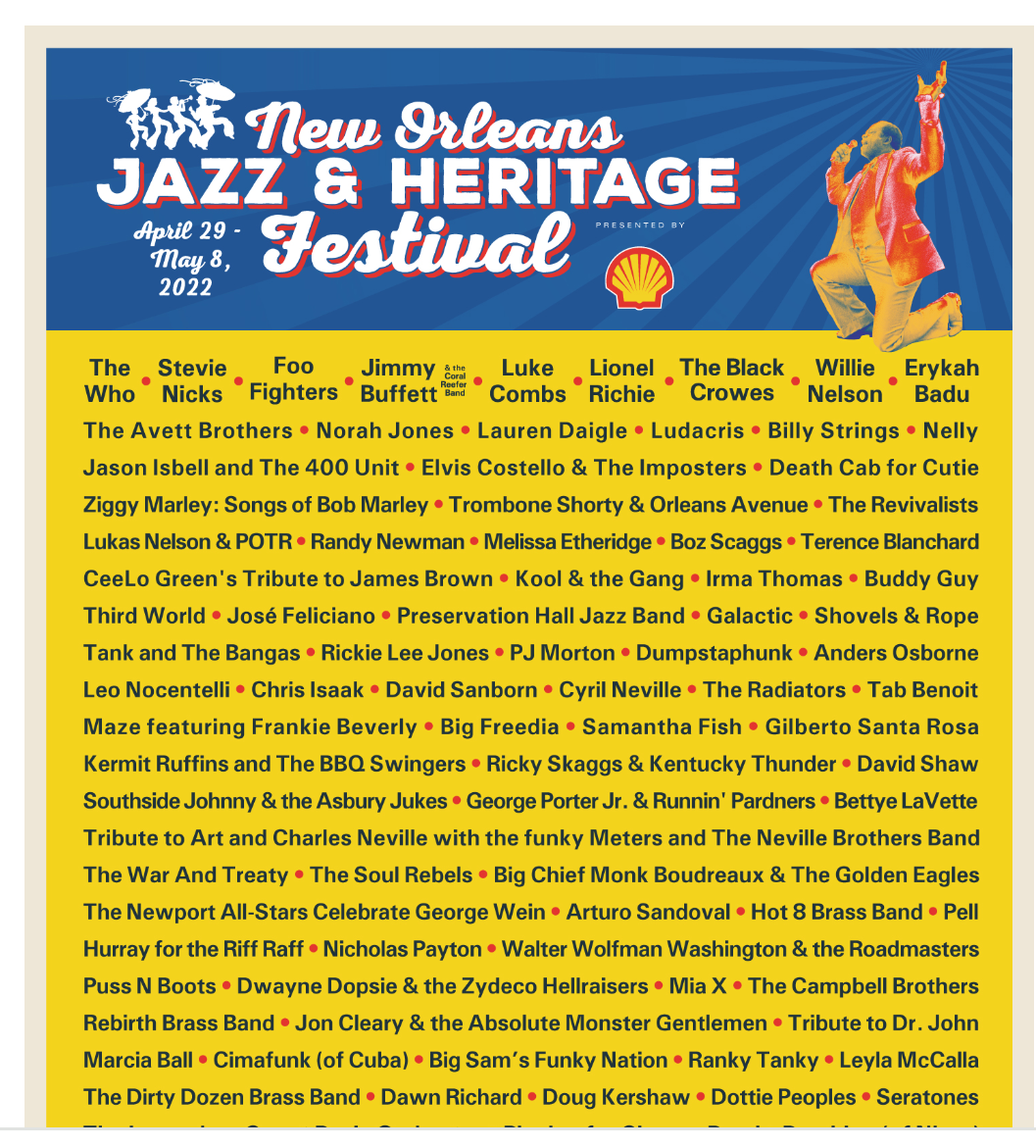 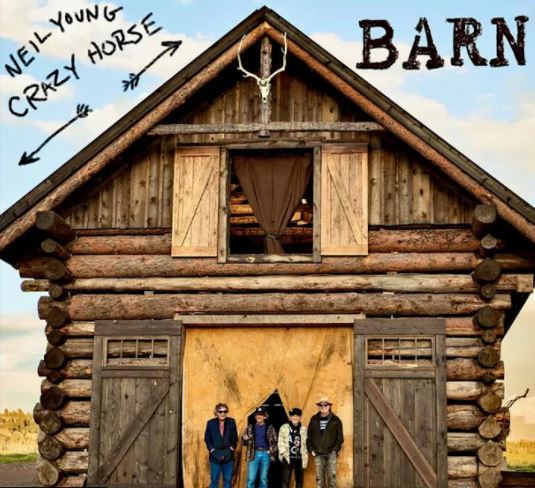 The Neil Young & Crazy Horse rockdoc A Band A Brotherhood A Barn will stream on YouTube tomorrow (1/20) starting at 1pm eastern. Directed by Daryl Hannah, the film aspires to give fans an intimate look at the group as it works through 10 tracks on the album Young and the band put out in December, 2021. Recorded high in the Rockies at an off-the grid barn, the album is one Young says features "...new songs and feelings after what our world has been through and continues to face/ This music we are making for our souls. It's like fresh water on a desert. Life is going on."

Grab a look and listen here. 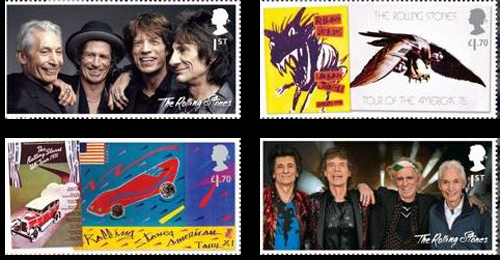 The newest evidence that England Royal Mail is much hipper than the USPS appears this week with the release of a vast series of stamps honoring the Rolling Stones. Available in multiple configurations that include booklets, presentation packs, gold pressed display sets, silver stamped ingots, the stamps will depict album covers, Hyde Park concert posters, photos and paintings of the band and individual members on stage. Framed enlargements will also be available. The Beatles, Paul McCartney, Pink Floyd and Queen have also gotten the Royal treatment with earlier special edition runs. 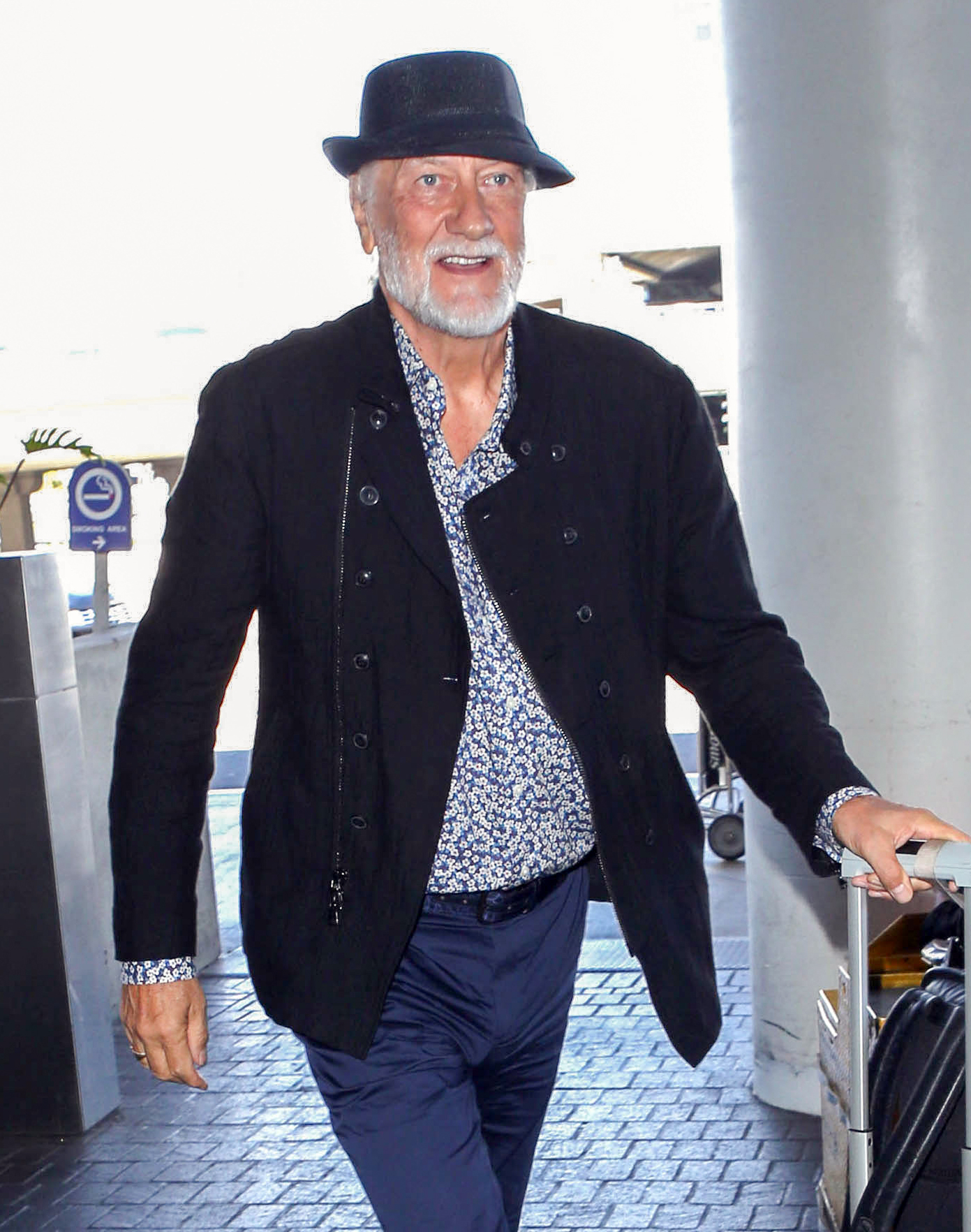 Mick Fleetwood is branching out. The Fleetwood Mac drummer inked a deal with FOX to produce a TV series titled 13 songs. In addition to serving as the show's Executive Producer, Fleetwood will provide music heard in episodes. According to Deadline, The lead character is a fictional veteran musician named Jasper Jones who, on learning that he has a terminal illness, sets out to get his former band back together to record 13 songs in the months he has remaining. Casting has yet to be announced, but scripting is being shared by Will Reiser (50/50 and Jonathan Prince (American Soul) and Jonathan Levine (Nine Perfect Strangers) will direct 13 Songs. 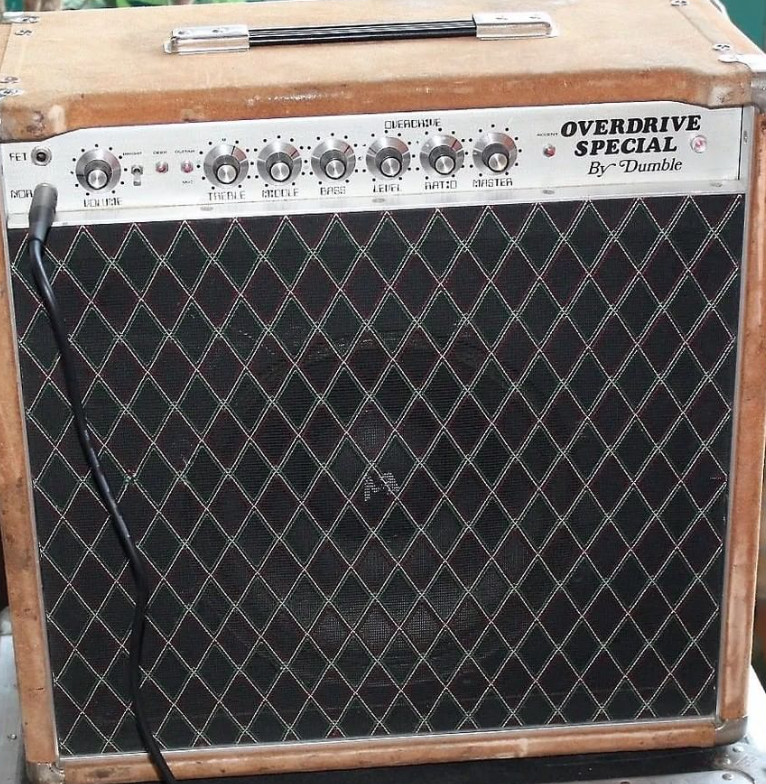 Even casual music fans recognize that Fender, Marshall, Peavey and handful of other brands are the dominant guitar amps used by rockers. But hardcore fans and great guitarists also know about the custom made amplifiers produced by Howard Alexander Dumble. He made them by special order for the likes of Eric Clapton, Carlos Santana, Stevie Ray Vaughan, Kenny Wayne Shepherd, Robben Ford, Eric Johnson, Kirk Hammett, David Lindley, Steve Lukather, John Mayer, Steve Vai, Joe Bonamassa and many, many more. Dumble's death was confirmed today via an Instagram post that read "It is with great sadness that we announce the passing of Howard. His work brought joy and inspiration to countless musicians and engineers. May he rest in peace." 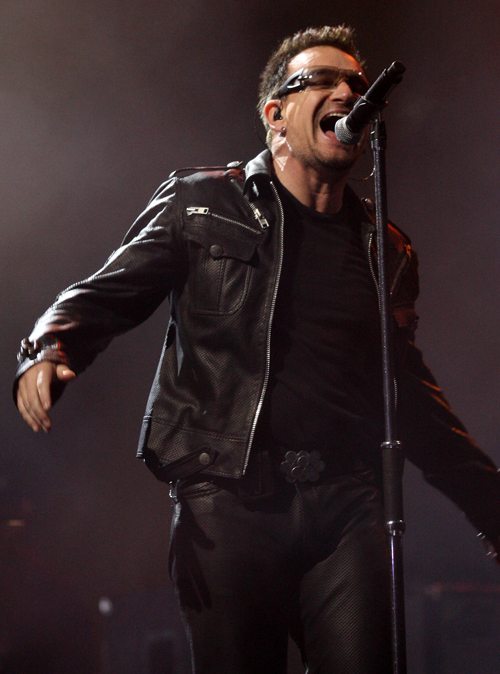 Bono lit into his own band and himself during a recent episode on the Awards Chatter podcast hosted by The Hollywood Reporter. The U2 front man said he's never liked the band's name, considers most of the group's songs so "cringeworthy" he won't listen to them and said he only learned how to sing "recently" and doesn't like the sound of his voice on the band's songs.

Joe Walsh leads the world in off-beat album titles with ones like The Smoker You Get, the Player You Get, You Bought It, You Name It, Got Any Gum?, So What, There Goes the Neighborhood, and You Can't Argue With A Sick Mind. REO Speedwagon offered up this one in 1978. 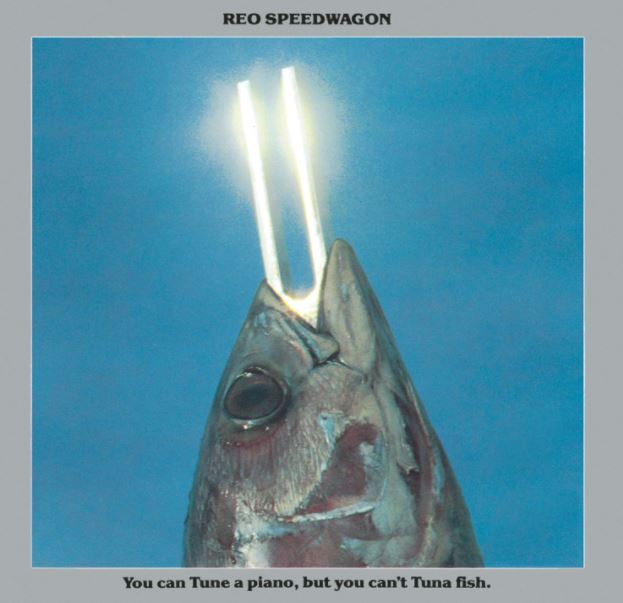 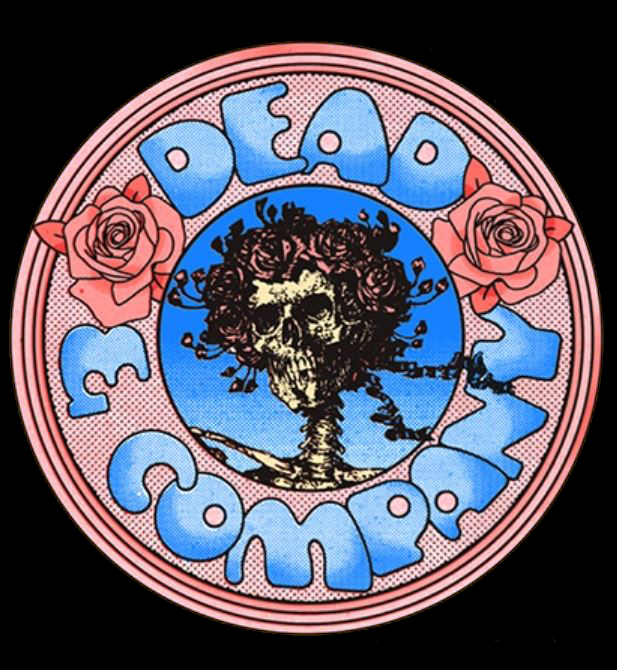 The Dead & Company planned to headline the massive Playing In The Sand beach front festival in Cancun, Mexico this weekend even though drummer Bill Kreutzmann had to drop out due to a heart condition got scuttled with the news that guitarist John Mayer tested positive for COVID-19.  That development led to the group deciding it couldn't perform at the opening weekend (1/7-10). Shortly after that, it was announced that the entire event was being called off "...due to additional COVID-19 cases amongst multiple artists and staff".  While refunds for the festival itself will be arranged, many of the thousands already there or en-route will probably be out the costs for hotel rooms and flights unless they secured 'for any reason' cancellation insurance. 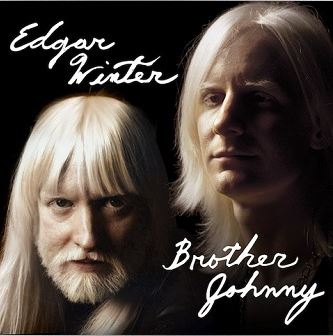