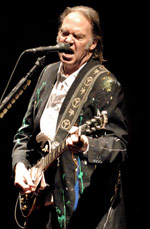 Neil Young was in Washington, DC Monday (9/10) to lobby against the Keystone XL Pipeline and oil sands projects in his native country.  Young's opposition to the two Canadian projects prompted him to say that production already underway has turned portions of Alberta into a 'wasteland' Young equated to something that 'looks like Hiroshima'. That remark seems to have really rankled a number of people including a self professed Neil Young fan, Canadian Natural Resources Minister Joe Oliver, who happened to be on Capitol Hill lobbying in favor of the pipeline.  Young's description of the area that includes Fort McMurray as a 'wasteland' also got the mayor of the town's attention, who shot back that residents were '...probably outraged because it's such a gross misrepresentation'.
TheHill.com   CBS News