Posted More Than Ten Years Ago by ROCKinsights 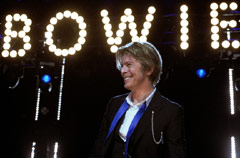 A Martin acoustic guitar played by Jimmy Page brought in a top bid of £26,250 (nearly $40,000) at a London auction conducted by Bonhams Wednesday (7/3).  The 2007 Birthday Special model guitar was donated for auction by the former Led Zeppelin axe master to raise funds for the Action for Brazil's Children Trust, an organization he regularly supports.  The same event saw the original lyrics David Bowie wrote down for his song Jean Jeanie go for £18,750 and the Vox 12 string guitar he favored during his Ziggy Stardust period brought a top bid of £13,750.  The oddest item in a lot, a lock of Mick Jagger's hair clipped by the sister of a former girlfriend of the Stones front man, brought in £4,000 that will go to Changing Faces, a charity that provides funding for reconstructive procedures to people with disfiguring injuries or conditions.