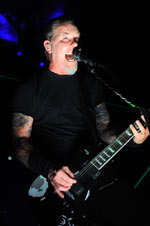 The mic problem that plagued James Hetfield during Metallica's Grammy Award performance (story/video) infuriated him to a poing drummer Lars Ulrich says he's never seen before. Addressing the tech trouble and his guitarist and singer's reaction to it, Ulrich said to the event's host James Corden, 'We get off stage, we gt back there, and I haven't seen him like that in 20 years. I mean he was livid. He's aged really well and he's a pretty chill guy, but the first 5 or 10 minutes in that dressing room was not a lot of fun.'
HenneMusic.com