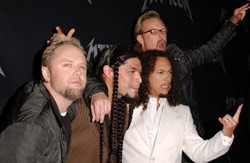 Hearing Metallica secured a spot in the 2015 Guinness World Records roster, we assumed it had something to do with decibels.  Turns out it had to do with where they played during instead of how they played.  The group's 2013 world tour included concerts on every continent.  The culminating performance of the 7 continent trek came with a 10 song set for 120 scientists and some contest winners in a geodesic dome on Antarctica in December.  Out of concern for the penguins and whatever else would have been startled or transformed by a typical volume Metallica show, amps were encased in sound barrier cabinets and band members and audience heard the set through headphones.
ClassicRock.TeamRock.com