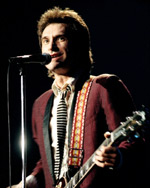 Ray Davies of the Kinks and Donovan Leitch will be inducted into the Songwriters Hall Of fame on June 12 in New York City.  While Ray and brother Dave both wrote tunes for the Kinks, Ray penned all of the band's biggest songs, including Lola and You Really Got Me.  Donovan, who scored a #1 song in the US in 1965 when Sunshine Superman topped the charts, was inducted into the Rock Hall Of Fame in 2012.  The Kinks earned that honor in 2005.
MusicTimes.com