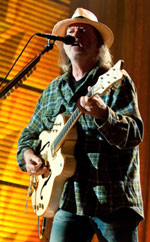 Reports that Neil Young and Jack White were working together on an album of cover songs have been discredited by a post on Young's Facebook page calling them 'False Rumours'. Young will release an album titled A Letter Home in March that was done in the unique recording environment of White's Nashville studio, Third Man.  Speaking with Rolling Stone, Young called the project '...one of the lowest-tech experiences I've ever had', which, for Neil, is a good thing.
On a higher tech note, Young plans to unveil Pono, his new ultra fidelity music file format and player, at SXSW in Austin, Texas in March.  That announcement came from Neil as he accepted the President's Merit Award from the Recording Academy.  Young's quest to develop a higher quality format alternative to mp3 has been going on for some time.
NME.com