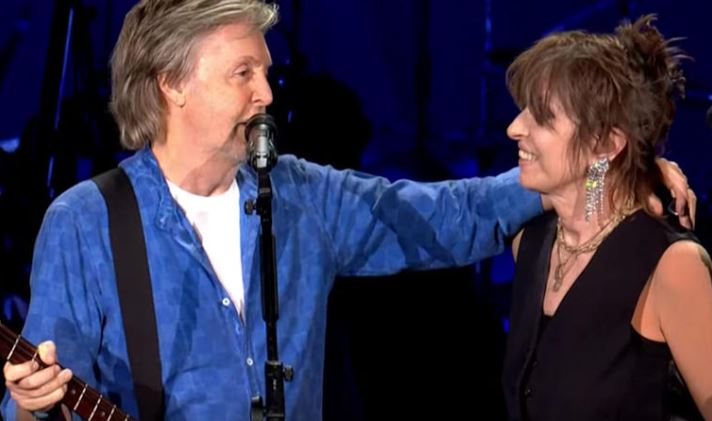 What was already an impressive lineup grew even more so with some late additions and surprise guests during last night's tribute to the late Taylor Hawkins of the Foo Fighters at Wembley Stadium in London. The night's music opened with the Foo Fighters backing Liam Gallagher on the Oasis songs Rock and Roll Star and Live Forever. Other highlights included Queens of the Stone Age's Josh Homme joined by Nile Rogers, Jane's Addiction's Chris Chaney doing David Bowie' s Let's Dance, Taylor's side bands Chevy Metal and Coattail Riders did versions of the Talking Head's Psycho Killer and T. Rex's Children of the Revolution, with Wolfgang Van Halen later joining the Riders on VH's Hot For Teacher. Led Zeppelin's John Paul Jones reconvened Them Crooked Vultures for the first time in 12 years to do Goobye Yellowbrick Road. Chrissie Hynde of the Pretenders emerged with Dave Grohl on bass to do Brass In Pocket, Precious and Tattooed Love Boys. Joe Walsh brought former James Gang members out to play Walk Away, The Bomber and Funk #49, with Grohl playing drums on the closing song. AC/DC's Brian Johnson and Metallica's Lars Ulrich teed-up Back In Black and Let There Be Rock. Police drummer Stewart Copeland did Next to You with the Foo Fighters and added Gaz Goombes on Evey Little Thing She Does Is Magic. Rush veterans Geddy Lee and Alex Lifeson performed 21121 Overture (Grohl on drums), Working Man and YYZ. Queen's Brian May and Roger Taylor raised the roof with We Will Rock You, I'm In Love With My Car and Under Pressure with Roger Taylor's son Rufus and Luke Spiller of the Struts, followed by May doing a solo acoustic rendition of Love of My Life. The Foo Fighters took the stage with rotating drummers Omar Hakim, John Freese and Travis Baker to do Times Like These, All My Life, The Pretender, Monkey Wrench, Learn to Fly, One of These Days and Best of You. Unannounced guest Paul McCartney then emerged with Hynde to join the Foos on the Beatle songs Oh! Darling and Helter Skelter. The epic evening drew to a close with the Foo Fighters doing Aurora, then bringing out Taylor Hawkin's son Shane to drum on My Hero, after which Dave Grohl did Everlong solo.