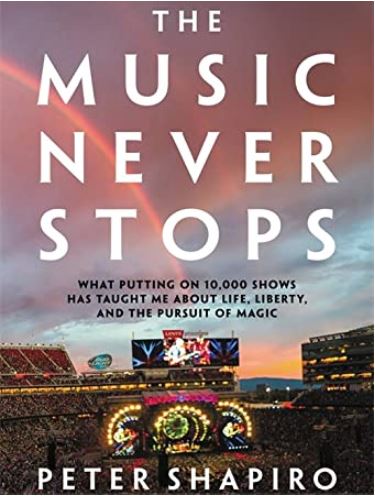 Consolidation has reached the point that the vast majority of medium to large scale concerts and tours are produced by just a couple of giant corporations that are also in the business of venue management and ownership. Some independent promoters have forged strong enough relationships and track records with artists, agents and managers to keep operating.

One of the foremost among them is Peter Shapiro. At 50, Shapiro remains involved in concerts and festivals, films (Tie Died: Rock n' Roll's Most Deadicated Fans and American Road), venue operation (The Brooklyn Bowl, Wetland Preserve, and Capitol Theatre), publishes Relix Magazine, founded FANS, an online forum for live music fans, and chairs HeadCount, a not-for-profit alliance with musicians to offer and encourages voter registration at concerts.

Even with all that going on, Shapiro found the time to write a book that's bound to be a fascinating read. The Music Never Stops: What Putting on 10,000 Shows Has Taught Me about Life, Liberty, and the Pursuit of Magic comes out in hardcover on August 2.