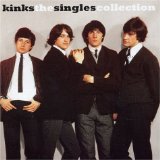 The many futile attempts to get Ray and Davies to not let their contentious relationship prevent the two brothers from playing together have left Kinks fans thinking a reunion would never come about.  Their disappointment could end in the spring of 2017.  The battling brothers have apparently decided to call a truce with the intention of playing together.  Ray's statement to a paper was as unequivocal a statement he's made since the two imposed an embargo against performing together when he reportedly said, 'Dave and I will definitely work together again. And we want to play live.'  He then added, 'Maybe the Kinks could play Glastonbury' as part of a tour.