Posted About Seven Years Ago by ROCKinsights 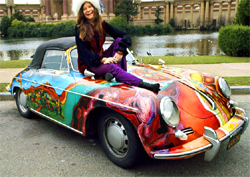 The psychedelically painted 1964 Porsche owned and regularly driven by Janis Joplin blew the doors off all estimates before the Sotheby's gavel fell on it's Thursdday (12/10) auction of the iconic auto.  The car had been predicted to bring between $400 and $600 thousand dollars.  The amount paid is especially remarkable because the paint job now wrapping the car is not the original one.  That had begun flaking away during the years her brother and sister shared ownership of the car.  They had it repainted a light shade of gray but later arranged with artists using photos of the original custom paint job to recreate it.  The sole remaining strokes by the original artist can be found on the underside of the car's gas hatch.  The Porsche had been housed in the Rock Hall Of Fame for much of the last 20 years.  Her siblings plan to use money they receive from the sale to fund social programs in their sister's name.  We don't know who the high bidder was, but they will be easy to spot if they plan to drive it.